Note: I originally wrote this blog post in August 2018. When I recently attempted to update it (in order to put in photo credits and a new postscript), I was given the option to use the new “block editor” to which I have — reluctantly — become accustomed. Except the new “block editor” only pretended to work on the first photo and then didn’t work at all on any succeeding photos. And as I was toggling around to try and make it work, I decided it might be wise to revert to draft mode so that I didn’t keep updating the blog post live. Then I feared that I had removed the blog post entirely from my timeline. However, after re-publishing it, it appears still to be listed in correct chronological order.

So… this is a slightly updated version of a blog post which you may already have read three summers ago!

Anyone who has spent time on the outer arm of Cape Cod can be deeply grateful to John F. Kennedy due to the creation on August 7, 1961 of the Cape Cod National Seashore during his short presidency.

According to Wikipedia — which is where I borrowed this map — it includes over 68 square miles of “ponds, woods and beachfront (in) the Atlantic coastal pine barrens ecoregion.”

It’s also where I and my sweetheart and various family members are fortunate to camp each summer during the last week of July and the first week of August — in North Truro on the Atlantic side of the outer arm (or wrist, really…) of the Cape.

In 2010 the campground where we have stayed for over 25 years — called North of Highland — was protected with a conservation easement thanks to the hard work and generosity of many people and organizations — including JFK’s younger brother, Senator Ted Kennedy.

So hopefully it will remain in operation for generations to come!

For me camping in North Truro is heavenly…

This is a view of our site from a site which some of our family members rent above us.

We are in a bowl which is home to pine trees, grasses, chipmunks, red squirrels, all sorts of birds, lots of ants, a few oak trees, crickets, various fungi, and quite a few blueberry bushes.

There are also visiting dragonflies, bees, mosquitos, horseflies, June bugs — who appear in the evening, attracted by our lights — and on some nights we can hear coyotes howling in the distance.

Although I have never seen a raccoon or opossum or rabbit or turkey or deer at our campsite, on one night someone DID get into our niece’s trash can.

So I am guessing that larger animals are around — just wisely inconspicuous during the day.

I love the way that sunlight dapples the trees and grass — and I love picking a few blueberries each morning. 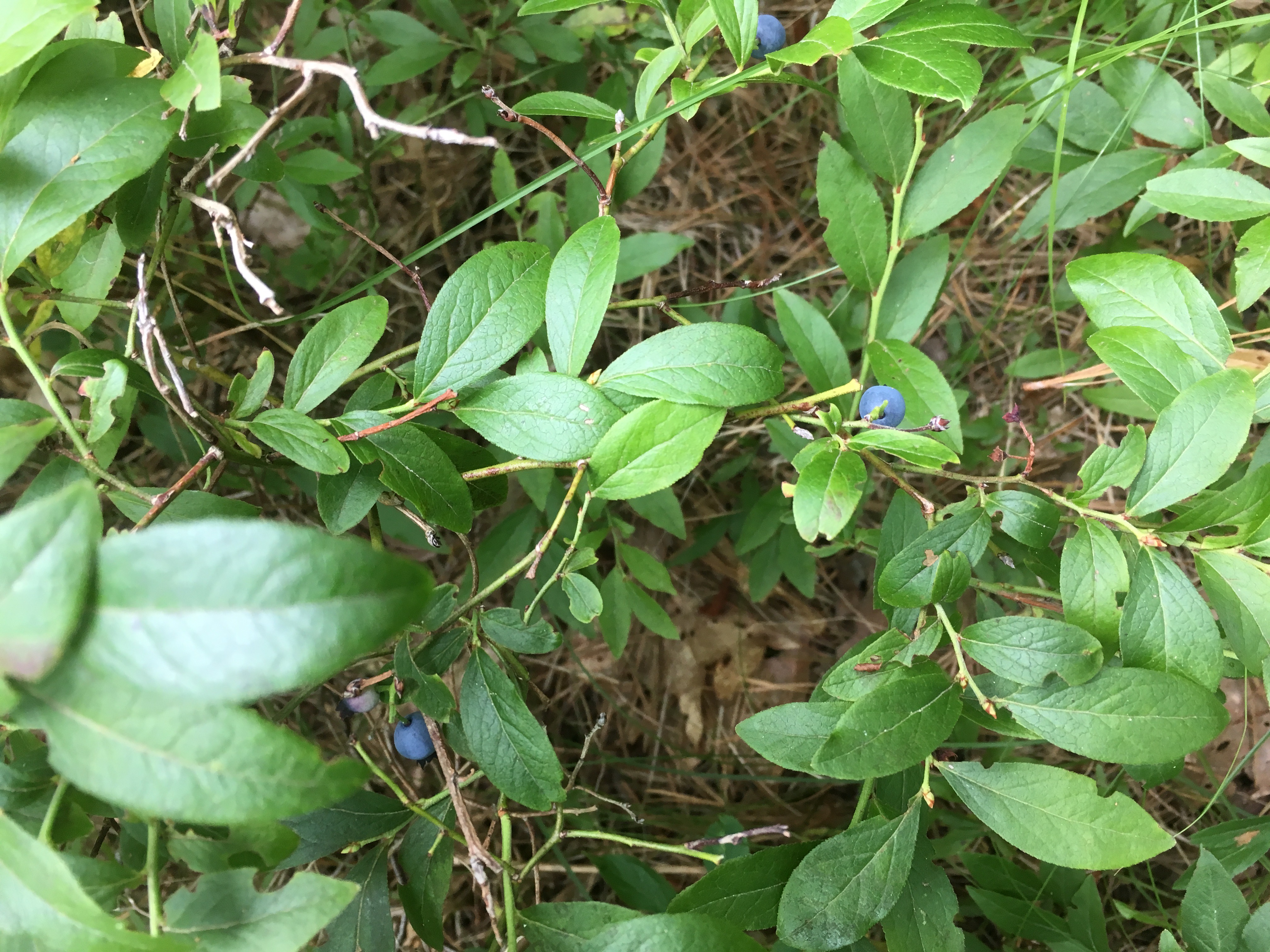 There weren’t very many this summer, which may be because it has been somewhat dry.

We only experienced rain three times this summer while we were camping — a) on the day we drove down to set up camp, b) once overnight, and c) a substantial storm on the day that we were packing up to return home.

When it rains I imagine how good the moisture must feel on the roots of all of the trees and shrubs and grasses.

Each berry is such a jewel… and hopefully there are plenty more for the folks camping at this site right now as well as for any animals who like to eat them, too.

I spend most of the day in our tent — which is quite spacious — with a ukulele, a little handheld digital recorder, a rhyming dictionary, two lap top computers, and several bags worth of song ideas.

Each morning I stretch and listen to song ideas I’ve accumulated during the previous months — or in some cases years — until something catches my fancy.

Then I focus on that particular idea for the rest of the day — writing lyrics, coming up with chords for a missing bridge, etc.

The song in the player at the beginning of this blog post is one I wrote a few camping sessions ago and later recorded with the pianist Doug Hammer at his studio north of Boston.

This is a view of our (green) screen house — where we cook and eat — and our (orange) tent. 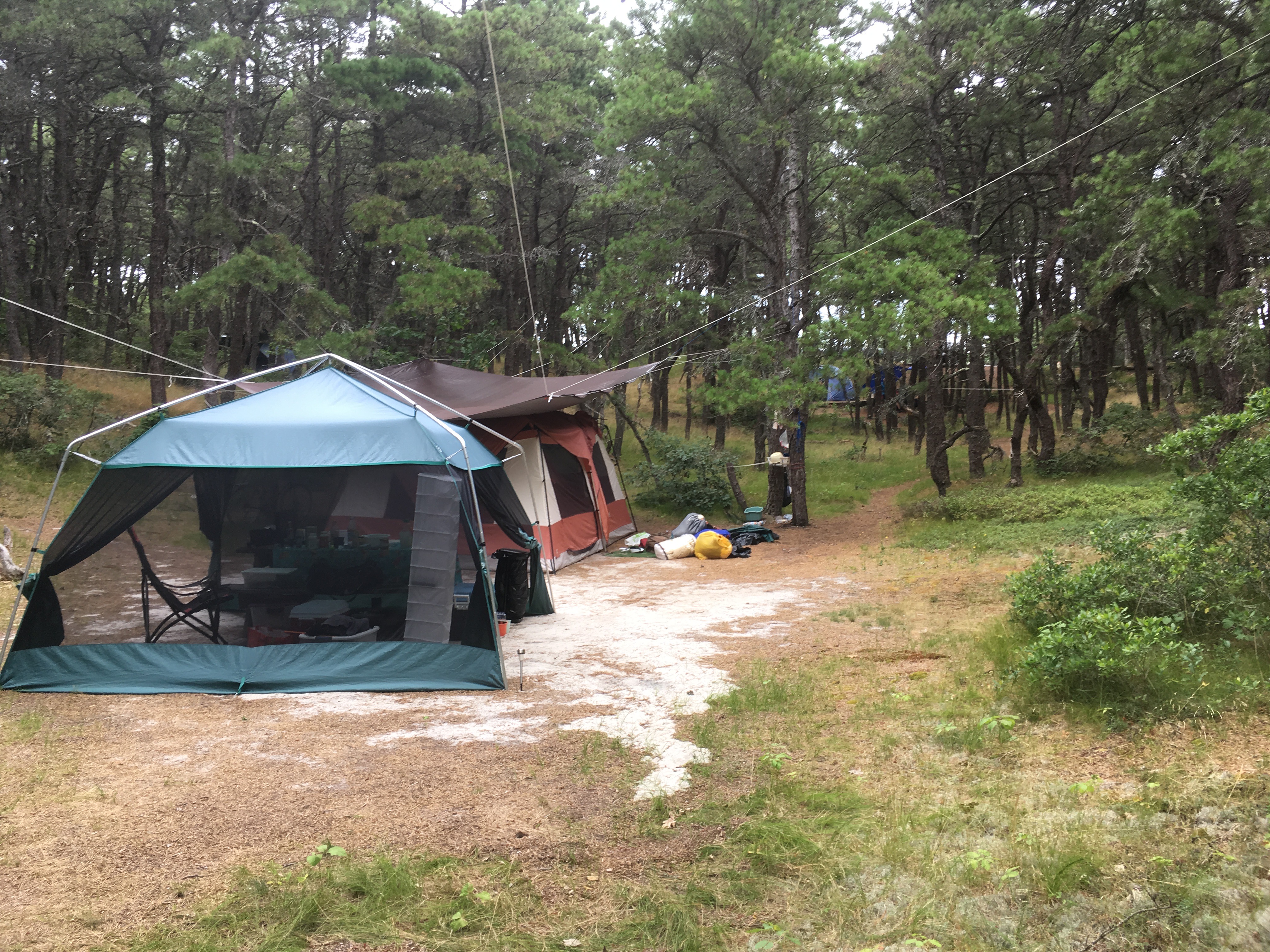 If you look past our tents in the upper left corner of this photo, you can glimpse the tent site from which the first photo in this post was taken…

There are many, many things I love about camping.

For example, when we are camping, we become much more aware of our relationship with water — since we are carrying it in big multi-gallon containers down to our campsite for drinking and cooking and cleaning dishes.

Also all of the sinks in the bathrooms at the campground have faucets that automatically shut off after a couple of seconds.

I also love that there are LOTS of stars visible at night.

I went for several long walks along the beach late at night when the sky was clear  — and the moon so bright that I didn’t need to use a flashlight to see where I was going.

Being away from street lights and TV screens and radios — while spending hours and hours surrounded by birds and insects and trees and sky — helps me reconnect with what’s important. 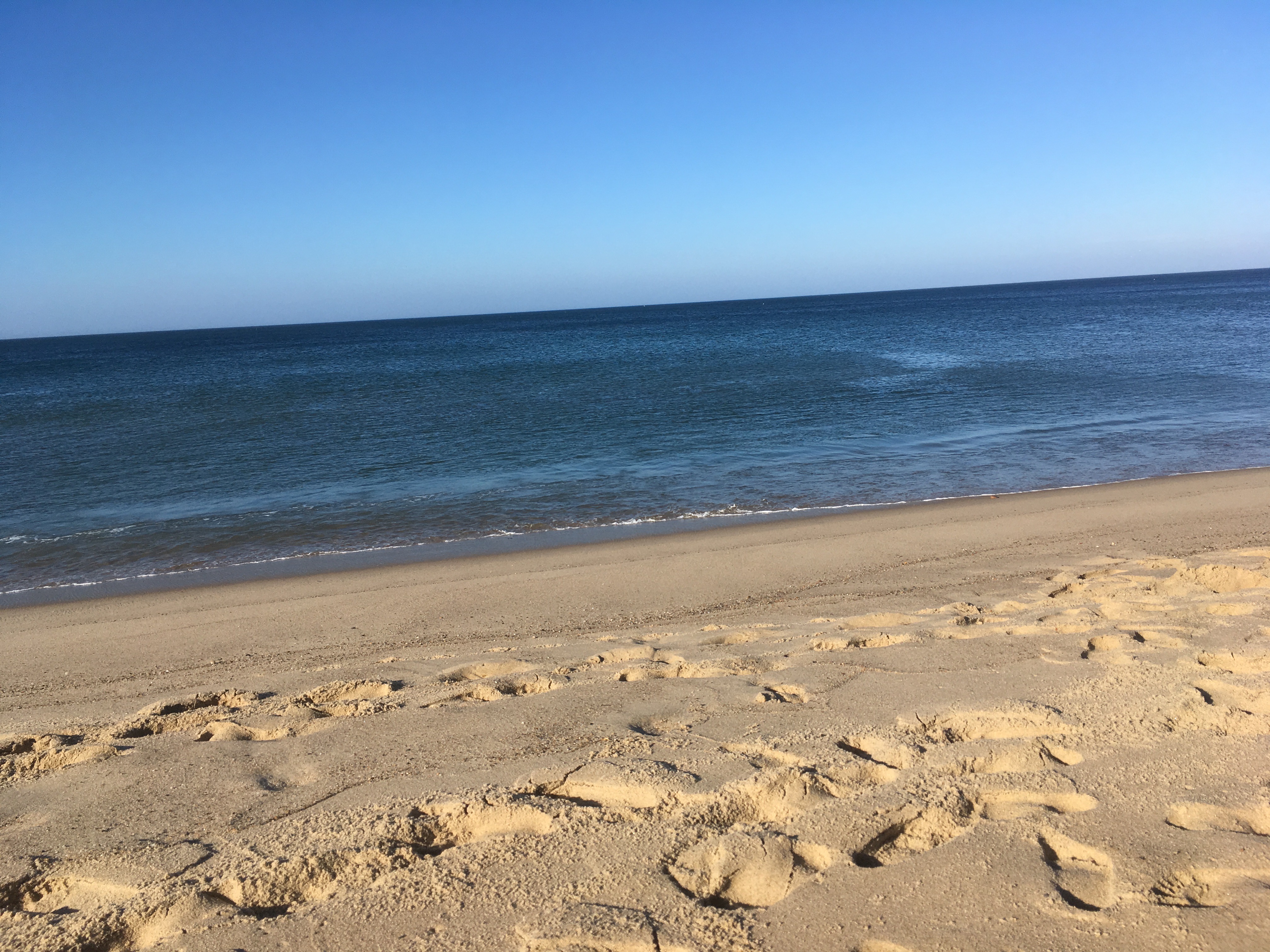 Before dinner — which is often something delicious cooked by my brother-in-law who bikes to the local fish store on an almost daily basis, bless him — I usually walk down a pine-needle-covered path to the Atlantic ocean and swim.

In recent years the tide and winter storms have created a gully along the beach which ranges in depth from one to five feet depending upon the time of day.

Since there is now a robust population of seals who swim up and down this section of the Atlantic ocean — as well as great white sharks who come to eat them — my family is much happier if I swim laps in the gully rather than in the ocean.

There were a couple of great white shark sightings during our two weeks at the camp ground, and also one day when a bunch of whales cavorted within sight of the beach.

Everyday I checked in with a hydrangea plant which grows near the path to the bathrooms and showers.

There was so much happening on this plant — it was a world unto itself!

And bees and wasps and even flies in many different shapes and sizes would gather pollen.

During the course of our time at the campground, several spiders wove webs — which in due time trapped a quite a few meals.

Here is a close up of one of the spiders against a green hydrangea leaf. 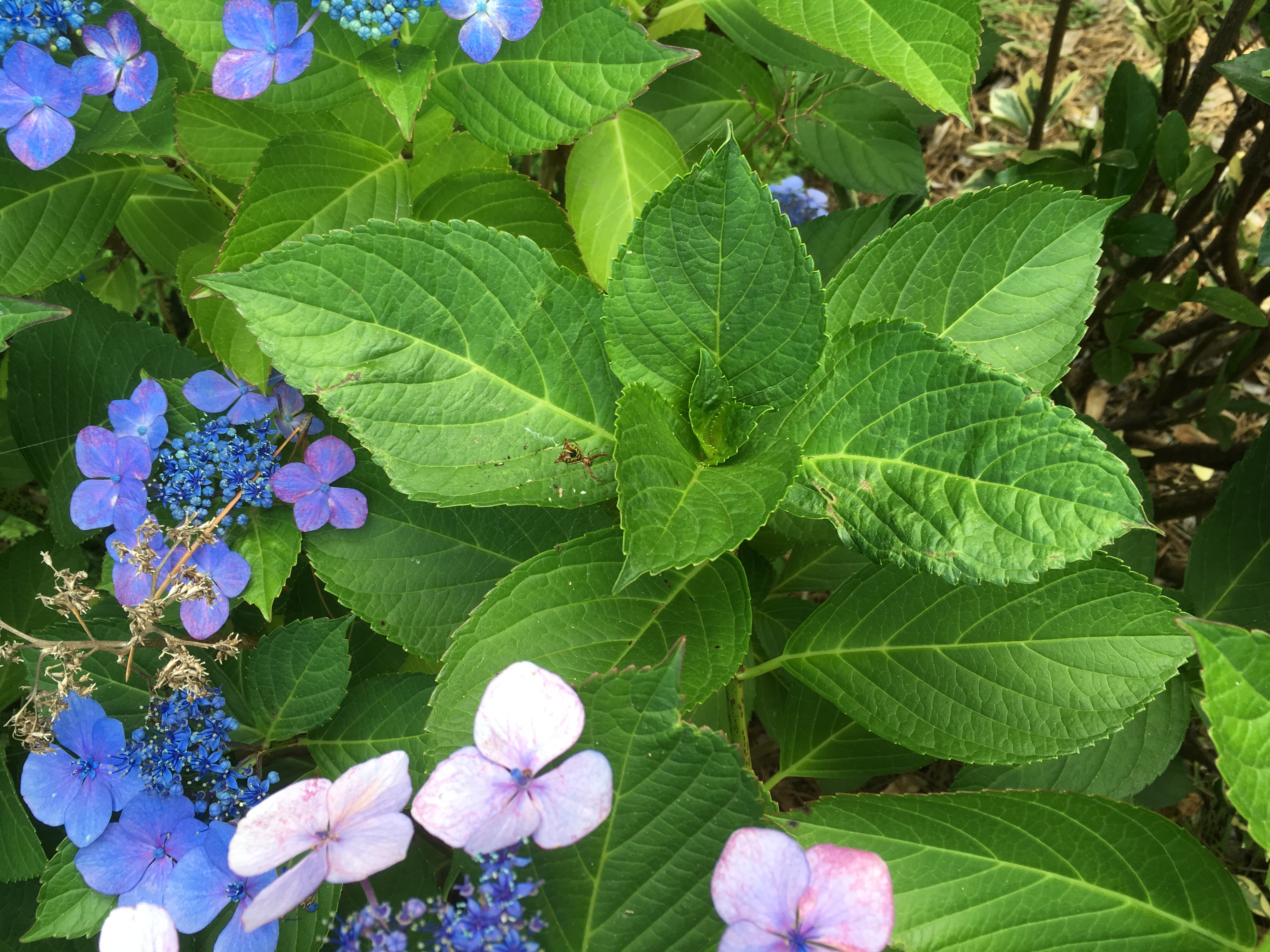 Eventually it was time to pack everything up and return home.

This is always a sad and somewhat stressful process for me.

But my sweetheart and family members are very patient, since they know it happens every summer on the last day of our camping adventure.

What doesn’t usually happen, however, is an hours-long rain storm on the day of our departure.

Strangely this lifted my spirits… 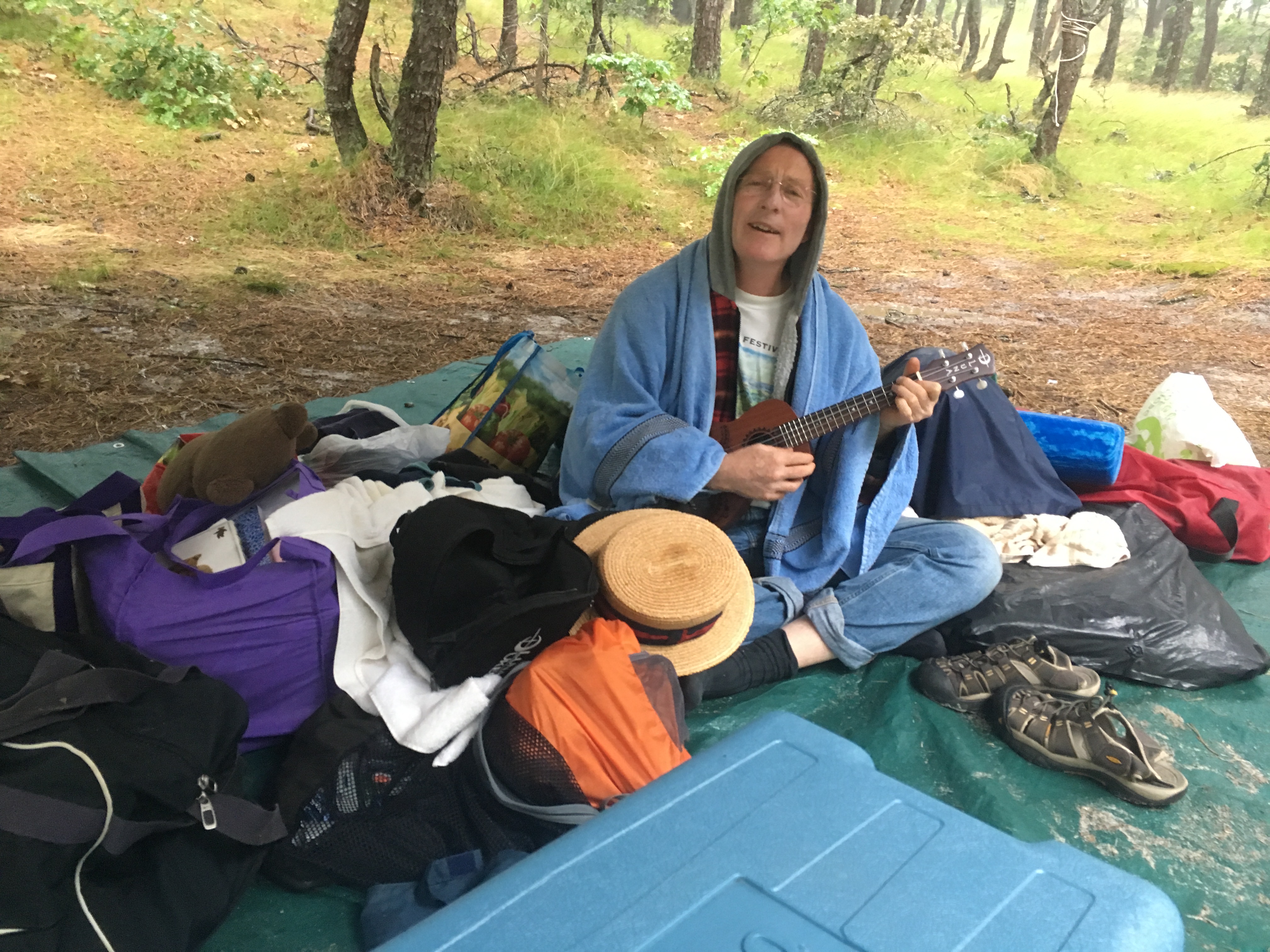 Thank you to all of the folks who keep North Of Highland camping area going year after year. I highly recommend it if you are in need of some rejuvenation!

Thank you to Andrew for letting me use his photo looking down towards our camp site, and for making so many delicious meals.

Thank you to Doug Hammer for his wonderful skills as a pianist AND as a recording engineer.

Thank you to the Kennedy family, whose love for — and lobbying on behalf of — Cape Cod has impacted millions of people — and plants and animals — for many, many decades.

Thank you to my sweetheart for all of the beach photos and for letting me use his phone to take photos of the hydrangea and our camp site.

And thank YOU for reading and listening to this blog post.

Where is your heaven on planet earth?

P.S. You are always welcome to visit my website, and you can find me singing (with Doug Hammer playing his glorious Schimmel grand piano) on Spotify, Pandora, Apple Music and other digital music platforms.

Summer is ebbing, and cooler air is flowing into our neighborhood.

In the morning I sit on our back porch, wearing a hoodie until the sun warms everything up.

I listen for sounds from the natural world — today a blue jay — competing with the sounds of cars and buses and trucks and motorcycles on nearby streets.

And I happily remember my time last month camping in North Truro on the Cape and next to Cayuga Lake in upstate New York.

I find camping to be a terrific reminder of many important things — how little water one needs to wash dishes, for example. Or wash one’s hands. Or take a shower.

The campground has cabins with sinks and toilets and showers, but the sinks have taps which automatically shut off after about three seconds — a simple and very effective reminder to use water more mindfully — and the showers are activated by quarters (25 cents for three minutes of hot water).

And in upstate New York I simply jumped — except for the times when my feisty nephew Ryder pushed me — into the lake each morning and then scrubbed with Dr. Bronner’s soap and a washcloth.

We had no radio, no TV, and no internet.

We awoke early — due to birds singing their morning songs — and went to bed early, too.

Sometimes we all sang together after dinner — songs written by the Beatles being the most popular selections.

I wrote new songs for most of each day — happily holed up with my ukulele and laptop computers and rhyming dictionary — and then joined other family members for a swim in the late afternoon.

One of the most powerful part of camping for me is being reminded of the ebb and flow of life.

We see it at the beach.

The waves flow in and out at the water’s edge.

Back at camp, we see neighboring tent sites fill with new arrivals and then empty at the end of the week.

What was a colorful array of tents and coolers and towels and bikes becomes a community of pine trees, a picnic table, some squirrels, and lots of open air.

I find it a very poignant reminder of mortality — my own as well as the mortality of all the people and places and animals and plants I love here on planet earth.

This feeling of mortality seeped into the song I wrote, “Under My Umbrella,” which is embedded at the top of the page.

It seems to fit with the days getting shorter as we approach the autumnal equinox.

Thanks for reading…and listening.